Here’s a question from a reader: I’m trying to replace the MS Mincho font used in my PowerPoint presentation with another font, but PowerPoint won’t allow me to do so. What are my options?

Although this seems like a simple question, there are many factors that could be at play here. Let’s explore them, one by one.

Although the question asked by the reader was about MS Mincho, you can use the guidelines and ideas shared in this post for any other font.

1. You probably do not have MS Mincho installed

If you open a presentation that uses MS Mincho, and if that font is not installed on your system, then PowerPoint won’t tell you that MS Mincho is being substituted by another font.

But isn’t MS Mincho a font that is installed as part of Microsoft Windows? Why would the font need to be substituted if it already exists?

Yes, if you are using a Japanese version of Windows, or if you have installed Japanese supplemental fonts, you may have MS Mincho available within the Fonts drop-down list in PowerPoint or other programs. It’s also possible that you may have MS Mincho installed if you upgraded from an older version of Windows, such as Windows 7 or Windows 8 to Windows 10.

To find out which fonts are installed in Windows using the Fonts app, follow these steps:

Ways to Get Mincho

Here are some ways to get MS Mincho:

Steve Rindsberg, a PowerPoint MVP who also has considerable experience with Japanese says, Also, if users have a presentation that includes Mincho, it’s likely to have been edited on a Japanese-language system and might then have that odd linebreak-in-the-middle-of-words problem; to fix that, you must have Japanese language support installed. So installing Japanese language support and getting an installed copy of MS Mincho is a win-win!

MS Mincho in an Older Version of Windows

I found MS Mincho in an older version of Microsoft Windows. In fact, the version I used is Windows Vista, which is the predecessor of Windows 7.

Figure 3, below, shows the Fonts app in Windows Vista, with MS Mincho highlighted in red. Do note that the font is quite large at 8.66 MB. 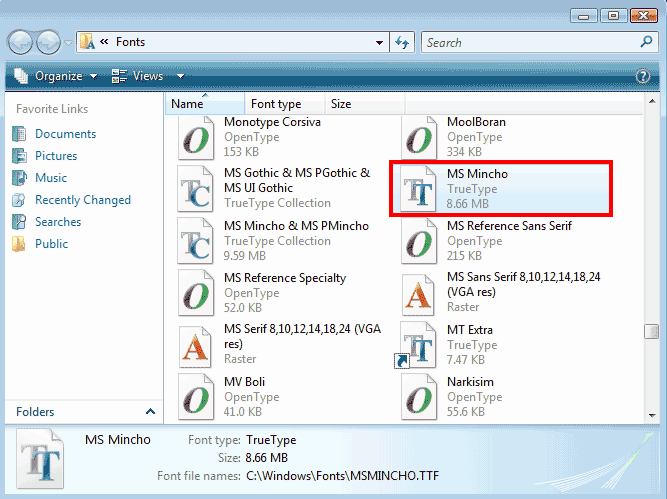 You can copy this file from an older version of Windows, and drag it into the Fonts folder in a newer version, as shown in Figure 2, previously on this page. Of course, this assumes that both copies of Windows are licensed to you, and Microsoft Office installations on both computers are also licensed to you. If these factors are not true, then you may be on the wrong side of the law if you attempt to copy fonts from one computer to another. We cannot be held responsible for anything you decide to do, and it’s best you discuss whatever you are doing with your legal counsel.

2. You cannot replace MS Mincho with a Single-byte Font

We will not go into the differences between single and double-byte fonts in this post, but if you are interested in learning more, please look at these resources:

What most people do in this case is replace MS Mincho or another similar font with Arial Unicode. You will find links on our Replace Fonts in PowerPoint page to do so.

While PowerPoint won’t let you replace a double-byte font with a single-byte one, a third-party add-in called Slidewise lets you easily do so:

Yes, this is one of those tricks that’s easily done using Slidewise. To learn more about Slidewise, read our interview with Mike Power. Also, look at our introductory walkthrough video on Slidewise.

The third option is to manually find all occurrences of MS Mincho, and then change the font to something else. Do note that this can be a time-consuming task because fonts could have been used on slides, in the Slide Master, or even in other Masters such as the Notes or Handout Masters. Do look out in charts and tables too, and in the work area beyond the actual slides themselves.

Steve Rindsberg adds, If Mincho, or any other missing font isn’t installed, PowerPoint and Windows will substitute the closest available font. Before trying to hunt down every possible instance of the errant font, look carefully at your slides and notes text. If nothing seems amiss, you might want to leave it as is. That missing font might be a space character in one Notes page, or something else that’s inconsequential.

Whatever approach you take, you need to ensure that you are using fonts that will work as well on the computers your recipients use.

I wish to thank Steve Rindsberg and Mike Power for their help in researching this post.

« Install Another Language in Windows 10

Edit and Delete Users on the Synology DS920+ »