Videos are everywhere. How many people read recipes rather than viewing recipe videos on YouTube? How many people want to buy a book to learn how to use a cool new PowerPoint feature rather than watching a demo in a video? The answers are obvious: everyone these days would rather watch a video than reading or just listening because videos are more than reading and listening–they also encompass showing!

And that’s the reason why many users, including first-time video-creators, are looking for a video editing software that’s not going to burn a hole in their pockets, but still, be capable to create and capture their ideas. If the video editing software is easy to use, that’s an amazing bonus. So, let us see if our review product for today, EaseUS Video Editor fulfills these requirements?

My contact at EaseUS for this review was Miley Shen. Thank you for coordinating, Miley.

You can download the installer for EaseUS Video Editor from the EaseUS site. If you have already bought a full-licensed version, the link to the installer can also be found in the email you received after buying. Alternatively, if you want to test the video editing software from EaseUS before making a decision, they provide a fully-working trial version that you can again download from their site. 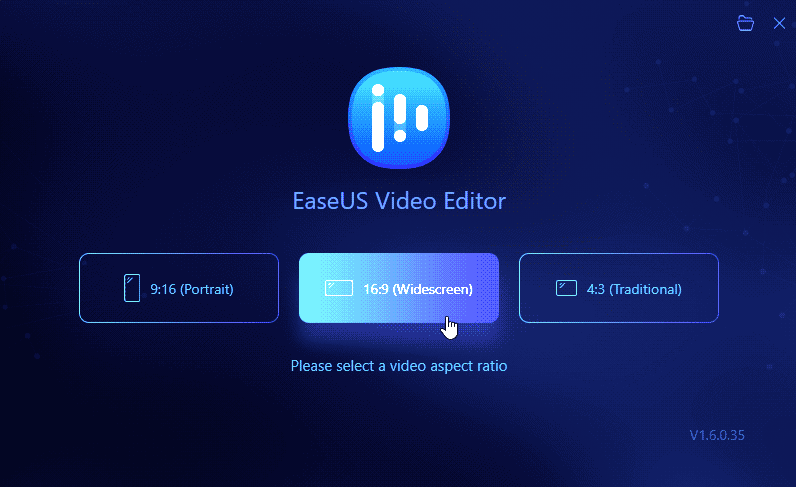 Next, you will see the EaseUS Video Editor interface, as shown in Figure 2, below. You will see some helpful indicators such as asking you to Import videos, photos, and music. Notice also the prominent orange-colored Upgrade button on the top-right. We will look at the Upgrade option later in this review.

To use EaseUS Video Editor, you need to start with some footage such as video clips or images. We imported two video clips, sourced from Pexels, as shown in Figure 3, below.

We now dragged both these clips to the Timeline area. Note that you can zoom in and out within this area using the zoom icons highlighted in red within Figure 4, below.

Notice also the Preview area highlighted in blue within Figure 4 above, where you can always play and see what your end results will look like.

Next, we added the Golden Snow Element from the Elements Pane, shown in Figure 5. Hundreds of such elements are pre-built within the program. 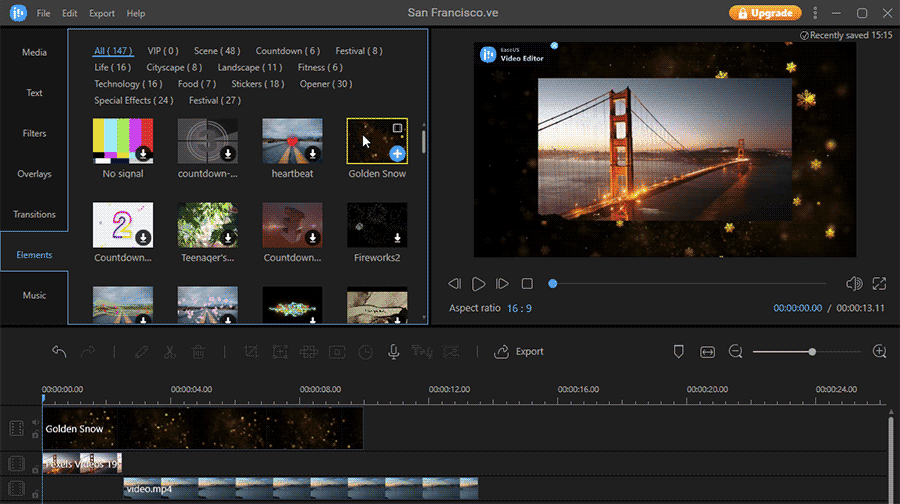 We finally added a music clip from options available within the program, as can be seen in the Timeline within Figure 6.

Figure 6: Added Music to the Timeline

Finally, we clicked the Export option above the Timeline to bring up the Export dialog box that you see in Figure 7, below.

You can export to many file formats such as MP4, AVI, WMV, MKV, MOV, and animated GIFs. For each of these formats, you can choose to output to various resolutions. Some options are only available to VIPs, as shown in Figure 8, below. These indicate that you have upgraded from the free version of EaseUS Video Editor. We happily upgraded from the free version because doing so also removes the EaseUS Video Editor watermark from exported videos.

Our finished MP4 file took a few minutes to render.

So, what’s our verdict about EaseUS Video Editor? First of all, this video editing software is easy to use, not too expensive, and it hand-holds you with options so that means a diminished learning curve. But, you cannot ignore the amazing amount of elements, transitions, effects, music, and other assets that are included within EaseUS Video Editor. It is EaseUS Video Editor’s plethora of such generous options with bundles of hundreds of such media assets within the program that makes it so easy to use. It’s also a one-stop destination for creating video content.