Do you want to create Animated GIFs using PowerPoint? Now that Microsoft has finally added this feature to Office 365 versions of PowerPoint, you can create an Animated GIF from your PowerPoint slides effortlessly.

If you are creating a new presentation from scratch for the animated GIF, make sure that your PowerPoint slide proportions are exactly what you want. You can change these proportions by accessing the Design tab on the Ribbon, and then clicking the Slide Size button. Doing so will bring up the Slide Size drop-down menu you can see in Figure 1, below.

You can choose between Standard (4:3) and Widescreen (16:9) options, or you could choose the Custom Slide Size option, which brings up the Slide Size dialog box that you can see in Figure 2, below. 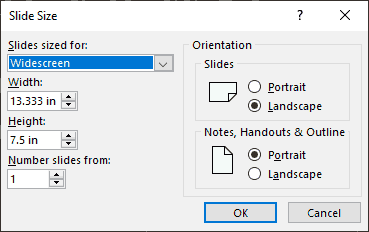 It’s important to note that it really does not matter what exact Width or Height you type in the boxes of the same name, because PowerPoint only creates animated GIFs in four heights (240, 480, 720, and 1080 pixels) and just uses the proportionate widths. So, why are we even making any changes in this dialog box. That’s because we want to set the aspect ratio proportions.

Now create your slides, and add animations and transitions as needed. You can also add video clips, but the exported animated GIFs will only show the video part. Any sounds in audio or video clips is irrelevant as far as animated GIF exports are concerned.

When you have everything in place, choose the File tab to bring up Backstage view. Then, click the Export tab to see options shown in Figure 3, below. 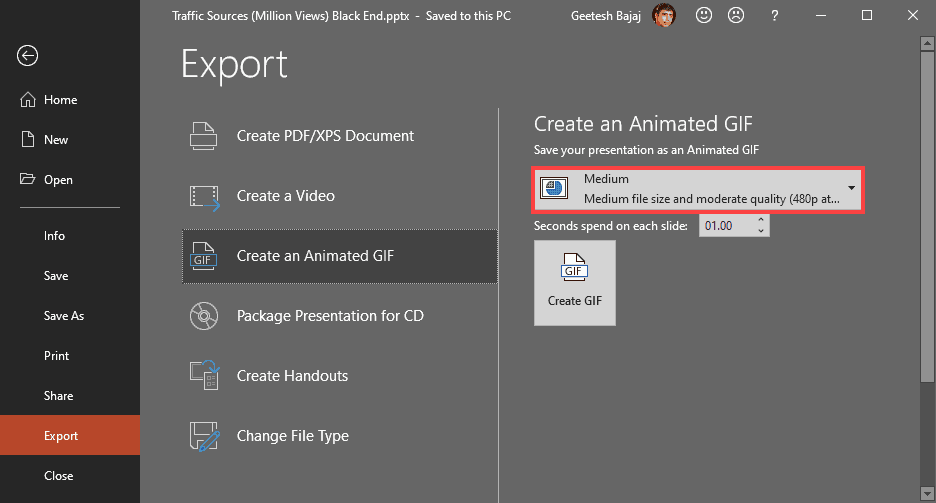 Now, choose the Create an Animated GIF option, to see further options on the right side of Backstage view, as shown in Figure 3, above.

Click the Export Size selected, highlighted in red within Figure 4, below. Doing so shows all export sizes available, as can be seen in Figure 4. 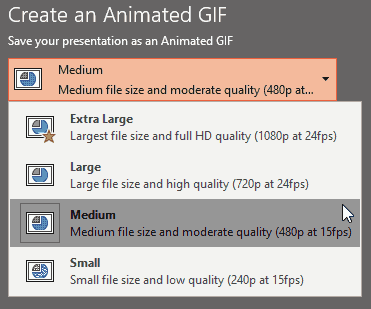 Figure 4: Choose an Export Size for the Animated GIF

You’ll see 4 choices, and all sizes are set to the height of the exported Animated GIF, will proportionate width calculated automatically. The height options are 240, 480, 720, and 1080 pixels.

Also, you will see the option to set seconds spent on each slide. This is only for slides that have no transition timings set, and the default is 1 second, but you can change this time to whatever you want.

Once you have made all choices, press the Create GIF button, and your Animated GIF will be exported.

Do You Have the Feature to Export Animated GIFs From PowerPoint?

Next, you may still not have access to the option for creating animated GIFs if you don’t have at least the following versions installed:
Microsoft Windows: Minimum version is 2001 (Build 16.0.12410)
Apple Mac: Minimum version is 16.33 (Build 19121106)

Explore our Updates for Office 365 Applications post to understand better.

This feature is not yet available on PowerPoint for Web.

You May Also Like: Create Animated GIFs from PowerPoint Slides

« How to Create a Gantt Chart Template in PowerPoint