Animated GIFs used to be very popular like twenty, or twenty-five years ago, because they were small in size, and worked well in a lower-bandwidth world. They were created using multiple images, which were similar to each other, but still had some differences. As the images played like a flipbook, they provided an easy illusion of movement. And, as suddenly as they had become popular, the animated GIF faded away.

And now, they have made a comeback. Alex Williams wrote for the New York Times, “Just as the LP has enjoyed a second spin among retro-minded music fans, animated GIFs — the choppy, crude snippets of video loops that hearken back to dial-up modems — are enjoying an unlikely vogue as the digital accessory of the moment.”

So it’s not surprising that I have started hearing from so many Indezine readers, who want to know how they can create animated GIFs using PowerPoint. Yes, this is certainly doable, although there’s no direct Save as Animated GIF option yet.

Before we explore how you can create animated GIFs, let us look at the file format itself. Back in those days, there were two types of images you could put on your websites. These were JPGs and GIFs. People used JPGs for photographic images and GIFs for anything that did not use too many colors.

Unlike JPGs, GIFs could be animated. That’s because a variant of the GIF format called GIF89a allowed you to combine multiple still images into an animated version. The non-animated, still version of GIF is known as GIF87a.

This one is from GIPHY.

OK, you did see that animated GIF? It’s good to see once, or for a moment, but it’s not something you want to see all the time. Back in those days, everyone wanted to create their own personal pages on GeoCities or Angelfire, and such pages were literally wallpapered with animated GIFs that were flashing text, igniting flames of fire, or splashing balloons. Internet marketers loved them because while you could love them or hate them, you could not ignore such animated GIFs. And that was precisely the reason for their downfall!

So for two decades, animated GIFs were often talked about, but not frequently used. In the initial years, Flash provided the options needed to present low-bandwidth video, and later, as bandwidths exceeded, people could manage with YouTube or Vimeo embeds. Yes, animated GIFs could be even smaller than Flash or YouTube, but there was this fear of Unisys trying to get royalties from companies that used GIFs in their products. Why? That’s because Unisys held the patent to the GIF file format, and for a long time, there was the notion of paying royalties to Unisys. When this patent expired in October 2006, it still took over a decade for the animated GIF format to revive.

And now animated GIFs are everywhere! They are used by new age sites, by artists and museums, by scientists, teachers, and engineers, and even by musicians and designers. I knew animated GIFs had arrived when I saw a detailed chart in a PowerPoint slide that was actually an animated GIF. This GIF wasn’t splashing and dazzling and used movement in a subtle way. A complicated chart was made simpler to understand by a technology that’s three decades old. And even better, there’s no problem if you insert a 10mb animated GIF file because video files can be much larger in size.

Coming back to the topic of this article, there are four ways in which you can create an animated GIF from your PowerPoint slides:

But wait, some readers say that even older versions of PowerPoint have GIF export built in! Yes indeed, but that export only supports saving to the static GIF87a file format, and not the animated GIF89a variant.

Finally, if you want to use animated GIFs “within” PowerPoint, rather than using PowerPoint to “create” animated GIFS, do check out our Resources page for Animated GIFs.

I wish to thank Jamie Garroch for his help and advice during the creation of this post. 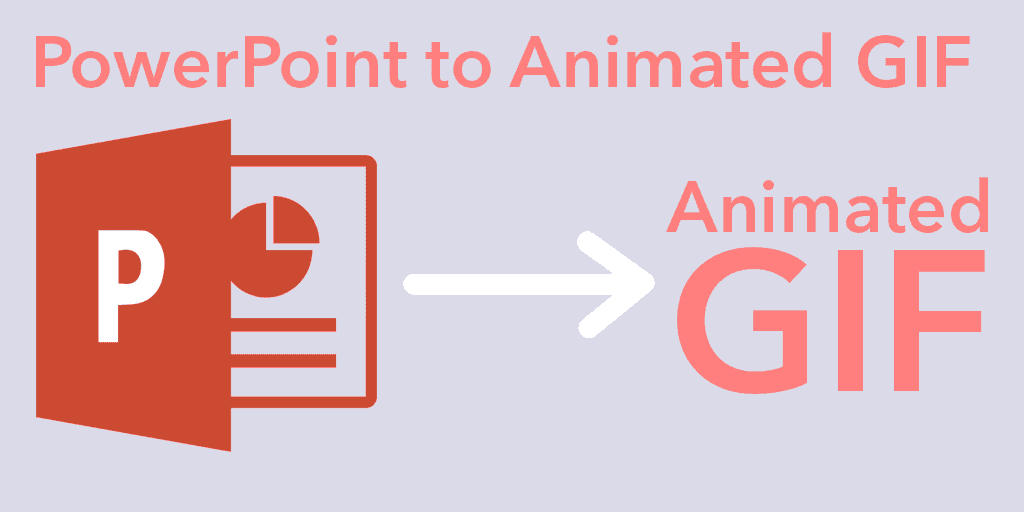